This essay originally appeared in this month’s issue of The Little Blue, the William Way LGBT Community Center‘s quarterly newsletter. In my day drag I’m the Director of Programs at the  Center so I think a lot about responsible and generative curation of the space we have. The need for safe queer spaces is never far from my mind, but perhaps it looms even larger this week. I encourage you to stop into The Center (1315 Spruce Street, Phila.) and pick up a copy of The Little Blue or look at our Pride art exhibition or visit our Library. It’s a wonderful, developing space and I’m proud to play a hand in shaping its story.

“Do we still need LGBT community centers?” Whenever I speak to college classes on behalf of the Center I always start off with the same question. “I’m not being rhetorical,” I say. “I want you to really ask yourself. After all of this advancement, in a city with its own Gayborhood, have we really moved beyond LGBTQI+ community centers?” Most students are on to my game and rarely offer arguments against the Center. Nevertheless, after asking the question I always spend the next hour (or two) making the case for this building, this organization, and my job. I argue both points, not as a rhetorical exercise or a self-conscious defense, but as a way of creating. More often than not, the students I’m talking to haven’t ever asked themselves those questions. Why would they? I’ve found, however, that I learn the most about the Center—our past, our future—by justifying our existence. Do we still need LGBT community centers? Of course. But why?

In January, I received an email from Aidan, a doctoral student, who wanted to spend a prolonged amount of time observing and taking notes on the Center and the ways that people interact with it. Originally, he was going to limit his observation to the Library, but after a conversation we decided that the lobby might be a more fruitful space. As his notes would be confidential, anonymous and not part of a larger study, I also felt that this wouldn’t be a violation of the implicit privacy Center constituents can enjoy. Over the last four months, I’ve really enjoyed checking in with Aidan, hearing about how he perceives our space and what goes on in it and finding new answers to the question “Do we still need centers?”

In March, he e-mailed to ask if we could have a formal interview, so that he could also record my thoughts and theories about the space. “I have been in total awe during my observations,” he wrote. “The sheer amount of programs, services, support offered by the WWCC is amazing.” He wanted to get a sense of the organizational priorities and the vision for the future. I am always interested in giving my opinion on anything, so naturally I said yes. We ended up spending over an hour in the Living Room on the first floor, talking about where I’d like to see the Center go, where we’ve come from and all the different ways that people experience the organization. More than anything, however, we talked about the environment. We both shared a fascination with the building itself, the position in the city ecosystem and the transformative nature of this space.

I suggested that the Center is a queer space. Even though we have a marked lack of disco balls and confetti cannons, this is a space where being LGBTQ or an active ally is the default, the norm. It’s a space where I can kiss my fiancé and not think twice, where when I hear someone talking about a date they went on the night before, I automatically assume that said date was not heteronormative. There’s very few spaces like that. Most spaces are actually straight spaces. Your average bar is demonstrably straight—not just in what goes on there but in the way the space functions in the world. Straight is the norm. “Do you think that a space like a supermarket is a neutral space or a straight space,” I asked Aidan, rhetorically. (Perhaps all my questions are rhetorical? What do you think?) We both agreed that we’d categorize most markets as straight spaces. Not, necessarily, because one assumes that Uncle Ben is married to an aunt but because our world defaults to straight. So unless the supermarket makes a concerted effort to queer the norm, it will always be straight, overtly or subtly, in large ways or small. 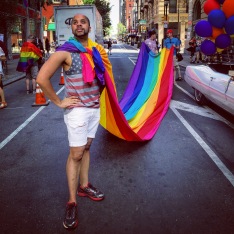 Perhaps one day we will achieve a world where there are neutral spaces. Maybe you have access to some in your life. If you do, I’d love to hear about them. Send me an e-mail; I find this topic endlessly fascinating. But, until we escape the binary, we will have to continue to construct our own spaces that are objectively queer. And that’s the answer that I give to my own question when I speak to colleges. I ask them to look around their classroom, to be passive observers. “If you didn’t know anything about this room or the people in it, would you think it was straight or queer?” By that time they’ve wised up to my game. “Straight,” they answer. “Very good,” I reply. We spend a few minutes talking about why this classroom, with its whiteboard and nondescript desks could be considered straight. Sometimes they argue; I like that. In the end, I always invite them to do two things—and I invite you to do the same: I invite them to ask themselves to define the nature of the spaces they find themselves in, as an observational exercise, and then I invite them to come into the Center to find out what a queer space feels like. “I warn you,” I say. “It is not like the set of that Liberace movie. It’s an old building with a lot of old furniture. But it’s also a place where LGBTQ self-expression is not only accepted, but encouraged. It’s the norm. And that’s important. You may not feel it explicitly; it may not hit you over the head. But it’s in every wall, every floorboard, every minute of every program. We will always need that.” 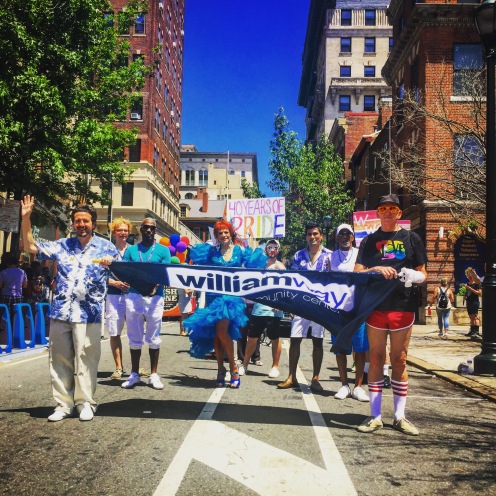 One thought on “Do We Still Need the Center? Or, the Makings of a Queer Space”